A small RPG for playing as plush toys!

To go back to the main page, click HERE

To make a character, you first will need to give them 3 special traits. These are special things about them related to their body, mind, and interests. Try to come up with traits that are specific and personal to your plush to distinquish them from other plush toys. Along with that, make sure to determine your HP which starts out as 5+1d4. Think of this as seeing how well your plush was made.

When performing risky tasks, roll the highest number on a die decided by the Game Master(GM). Difficulty ranges from: Lowest||1d2-1d4-1d6-1d10||Highest

Your Special Traits allow you to either lower the difficulty of the task by one die type (to a minimum of 1d2) or to reroll if you've already tried once.

When determining if your special trait applies to a situation, simply discuss it with your GM and the other players. If the group feels that the trait applies well enough then you'll be able to use the bonuses described.

Also if you feel your trait, especially traits relating to your plush's form factor, fit then ask if maybe you might be able to perform a special action related to that, like if your plush is a snake and could slither into nooks other plushes might not be able to.

Combat is very simple in Plush Basic, purposefully so. Plush toys aren't usually very familiar with fighting, nor the few things they can fight like bugs, small mammals, other plush toys, and possibly spirits!

You almost always roll 1d2 to fight. All characters deal 1d6 damage when not using any weapons. When a fight first starts, determine whether the players or the GM's enemies go first by rolling a 1d6. 1-3 has the players go first and 4-6 has the GM go first. After both sides have a turn, repeat this process on the next turn for as long as the fight lasts.

If your plush manage to pick up something to use as a weapon like a sewing needle or pencil, then use these damage listings:

Light weapons will deal 1d6+1 damage but will break if a 6 is rolled for damage. Light weapons include things like pencils and toothpicks

Heavy weapons will deal 1d6+2 damage but will break if a 6 is rolled for damage. heavy weapons include things like metal pens and small tools like screw drivers or even small hammers.

Keep in mind though that heavy weapons are quite cumbersome and will cause you to roll 1d3 When rolling to hit instead of 1d2. To roll 1d3, simply roll a 1d6 and subtract 3 from results of 4-6. Remember, when rolling to hit you are trying to roll the highest number on a die like any other task.

You gain XP for helping others and improving their lives. Plush toys naturally feel a deep seated but surpressable desire to comfort others. However going beyond comforting others and making their lives happier and more stable gives plush toys a special clear of mind. It is in this clear of mind that plush toys improve and learn best and they gain XP. The amount of XP given to a player is determined by a GM. Generally however you will be given XP by making another being's situation physically or emotionally better.

Once you have XP, you can spend it in the following ways:

4 XP: Roll for an extra 1d3 max HP, Come up with a reason for how they've become tougher either physically or mentally. You can buy this 2 times maximum!

6 XP: One of your special traits gets an extra reroll! This can be done either when lowering a task's difficulty or when rerolling already!

6 XP: One of your special traits can now lower the difficulty of a task by another die type!

6 XP: Once per fight, you can inflict a bonus +1 damage. This bonus stacks with weapons as well. You can buy this 3 times total.

An example character made from one of my own plush toys! 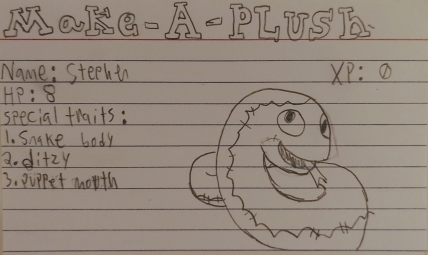